Tom Thomson is one of Canada’s most beloved painters. Described as our “greatest colourist” and “our Van Gogh”, Thomson’s expressive and vibrant interpretations of the northern landscape have become iconic representations of Canada. 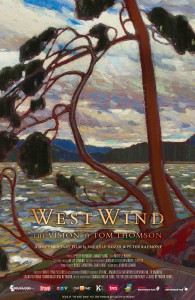 On July 8, 1917, just as he was reaching ascendancy in his craft, Thomson paddled across Canoe Lake and disappeared. His body surfaced 8 days later. The cause of his death remains a mystery.  What is it about Tom Thomson’s life, art and death that haunts us still, that draws thousands to his cairn in Algonquin Park each summer and propels his little sketches to the stratosphere of the Canadian art market? West Wind: The Vision of Tom Thomson unravels many of the mysteries of this brilliant, beloved artist.

“As gorgeous as the iconic artist’s paintings…West Wind is a great story of a great artist”
– Ottawa Citizen.

“Very enjoyable, visually stunning and thoughtful. As in their recent collaboration, “Genius Within: The Inner Life of Glenn Gould”, Peter Raymont and Michele Hozer investigate a genius and the nature of his genius.”
– The Vancouver International Film Festival