Lesotho is a tiny country in southern Africa with an enormous problem: HIV/AIDS. 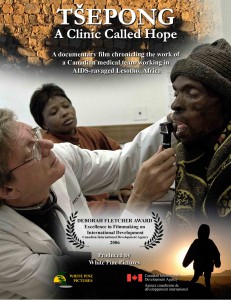 More than one-third of all adults in country are HIV positive, the highest rate in the world. Attempting to remedy the pandemic is a small group of Canadian health care workers who have traveled to a remote corner of the country to set up one of the country’s first HIV/AIDS clinics, and distribute life-saving antiretroviral drugs (ARVs).

Currently, the program is in danger of being a victim of its own success. There are just too many people desperate to get too few drugs. Failure, though, is not an option. If the Antiretroviral drug pilot project collapses, an ARV resistant strain of HIV/AIDS might develop and spread across the entire continent to eventually reach the outside world.

Now, Lesotho is not just a small, remote nation; it is the front-line of a global battle with literally millions of human lives at stake. This battle must be won and this story must be told.