What can a soap opera achieve in a place desperate for change but teetering on the brink? 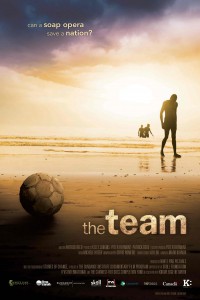 The international community intervened, a fragile peace was brokered, and a Truth and Reconciliation framework put in place. But as ethnic suspicion and violence continue to paralyze the country, many dismiss these actions as hollow political theatre. An alternative local response is the creation of a taboo-breaking TV soap opera, “The Team,” following the struggles of a co-ed multi-ethnic soccer squad to overcome their differences, both on and off the pitch. There’s inherent drama behind any TV production: will deadlines be met; will it be good? But here the stakes are exponentially higher: if you don’t captivate an audience, you risk further losing your country.

“The Team” is an intense, character-driven documentary offering a unique look at youth culture and popular media, following characters on and off the set, exploring how lives are reflected in the soap, and vice-versa. What can a soap opera achieve in a place desperate for change but teetering on the brink?