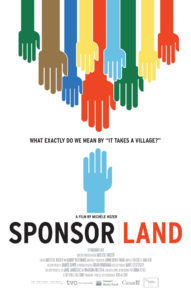 Canadians became international heroes during the Syrian refugee crisis when they stepped up, opened their doors, and sponsored thousands in need… but is there a catch?

Abdel Malek and Sawsen are just like you and me, except they’ve escaped a civil war and have eleven children. Now they’ve instantly gone from total strangers to extended family with a sponsorship group headed by Carlyn Moulton, a self-described “crazy lesbian art dealer” and her merry band of well-intentioned do-gooders. They’ve been dropped in Picton, Ontario, a very nice and very white rural town of about 4,702 that’s known for its clean air and fine wine but not for its falafel.

SPONSOR|LAND spends a year with this new group as we watch rites of passage like school dances and driving lessons, accompanying them on family outings to the skating rink and the Santa Claus Parade. All the while wondering why these Canadians are being so nice.

Also worth asking is whether Slieman, the eldest son and most charming guy in any room, will let go of everything that’s haunting him and everyone he’s left behind. Then there’s Ramez, the younger brother who does everything right. They may only be a year apart in age but they’re worlds apart in experience. Can Sawsen, the matriarch whose lack of English belies her knowingness, be able to steer her own family’s future without interference? Will these Canadian volunteers come to understand the difference between care and control? When happily ever after only happens in fairy tales, what do we have to sacrifice in order to fit in? What is owed to whom in the sponsorship transaction? And what exactly do we mean by “it takes a village”?

For more information and to view the complete film, visit http://sponsorland.ca