In 100 days in 1994, an estimated 800,000 men, women and children were brutally killed in the obscure African country of Rwanda. The victims – many horrifically hacked to death with machetes – were Tutsi, and the moderate Hutus who supported them. 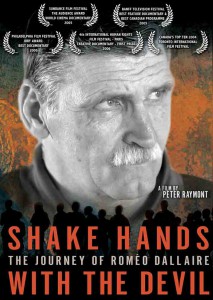 Canadian Lieutenant General Roméo Dallaire was mandated by the UN with keeping that peace, but unsupported by the Security Council, his soldiers were unable to stop the genocide. After ten years of mental torture and more than once attempting suicide, Roméo Dallaire poured out his soul in an extraordinary book.

Shake Hands With The Devil is a cri de coeur. In it, the General pulled no punches in his condemnation of top UN officials, expedient Belgian policy makers and senior Clinton administration officials who chose to do nothing as Dallaire pleaded for help. In April 2004 – the 10th anniversary of the genocide, Dallaire revisits the killing fields that haunt him. This documentary chronicles that visit.

“After shooting the Roméo Dallaire film, Raymont had handed Hozer the raw footage, too physically Replica Breitling Watches and emotionally drained from visiting the place where a million people had been butchered to do much of a rough cut himself. Six weeks later she handed him back the film, which won Replica Watches an Emmy Award. “She deserves the credit” he says.” -POV MAGAZINE

““Shake Hands With the Devil” emerges as one of strongest films at the Toronto International Film Festival .”
– Scott Foundas, VARIETY