A Promise to the Dead: The Exile Journey of Ariel Dorfman is an exploration of exile, memory, longing Best Replica Watches and democracy as seen through the experiences of a world-renowned writer. 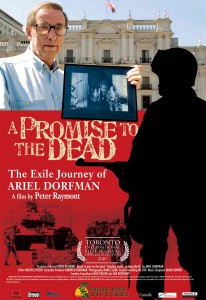 Ariel Dorfman is the author of numerous works of fiction in Spanish and English including:Death and the Maiden, In Case of Fire in a Foreign Land and Other Septembers. He has been translated into over 40 languages and his plays performed in more than 100 countries.

Yet, despite all his artistic accomplishments, it is for his political life that Dorfman is best known. Born in Argentina, he was raised in New York until his family was exiled during the Red Scare of the 1950s. Years later, Dorfman became Cultural Advisor to Chile’s socialist government.

When the government was toppled by a military coup Breitling Replica on September 11, 1973, Ariel Dorfman was among the few survivors of President Allende’s inner circle. Years later, he was told that he was spared because “someone had to live to tell the story Top Quality Replica Watches.”

Taking its lead from Dorfman’s best-selling memoir, A Promise to the Dead was filmed in the USA, Argentina and Chile in late 2006, coinciding with the death of former Chilean dictator, Augusto Pinochet.