When you’ve been to hell and back, how do you shake the memories? 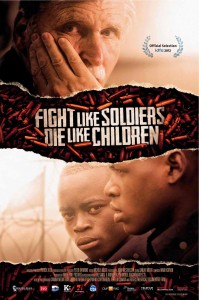 This question has haunted General Roméo Dallaire since 1994, when he was UN Force Commander during the Rwandan genocide, explored in our award-winning documentary Shake Hands with the Devil.

Dallaire has now found a reason to live: embarking on a mission to end the use of child soldiers. Will Dallaire succeed where others have failed? Or will he once again be forced to look on as the world turns away? Shot in DR Congo, Rwanda, and South Sudan, and across North America, our film will engage youth and adults alike, attracted by Dallaire’s magnetic personality.

Produced in association with TVOntario, Knowledge Network, Canal D, documentary channel, Telefilm Canada and the Rogers Group of Funds through the Theatrical Documentary Program with the participation of the Canada Media Fund, Rogers Documentary Fund and the OMDC Feature Film Fund.

Based in part on the book They Fight Like Soldiers, They Die Like Children by Lt. General Roméo Dallaire (Random House)
Worldwide Sales Agent: Films Transit International